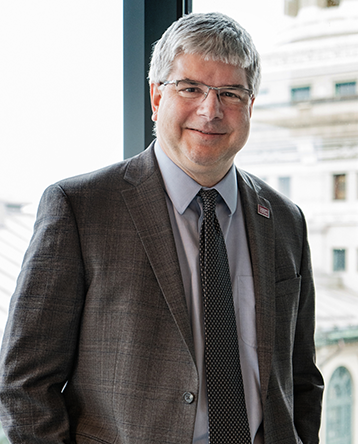 William H. Sanders is the Dr. William D. and Nancy W. Strecker Dean of the College of Engineering at Carnegie Mellon University and a professor of electrical and computer engineering. He is a leader in engineering research and academia, a well-respected collaborator in higher education who builds strategic public-private partnerships.

Sanders previously served as the Herman M. Dieckamp Endowed Chair in Engineering at the University of Illinois at Urbana-Champaign and the interim director of the Discovery Partners Institute (DPI) in the University of Illinois System where he led the joint education, research, and innovation institute in its efforts to drive technology-based economic growth. Backed by a $500 million appropriation from the state and more than $400 million in private funding, DPI spans three universities and includes eight other academic partners.

Sanders has spent the past 25 years of his career as a tenured professor at Illinois in the Departments of Electrical and Computer Engineering and Computer Science. His research interests include secure and dependable computing and security, as well as resiliency metrics and evaluation, with a focus on critical infrastructures. He has published more than 270 technical papers in those areas. Sanders has also directed work at the forefront of national efforts to make the U.S. power grid smart and resilient.

Beyond his significant scholarly record, he was the founding director of the University of Illinois’ Information Trust Institute in 2004, growing its faculty to more than 100 and attracting $80 million in external research funding by 2011. Sanders then served as director of the Coordinated Science Laboratory from 2010-2014 and was head of the university’s Department of Electrical and Computer Engineering from 2014-2018. He also co-founded the Advanced Digital Sciences Center in Singapore in 2009, which is Illinois’ first international research facility.

His awards include the 2016 IEEE Technical Field Award, Innovation in Societal Infrastructure, for “assessment-driven design of trustworthy cyber infrastructures for societal-scale systems.” Sanders is also an entrepreneur and the co-founder of Network Perception Inc.

Research and leadership awards and honors

Bill Sanders is installed as the inaugural holder of the Dr. William D. and Nancy W. Strecker Dean in the College of Engineering.

Dean Bill Sanders and CMU-Africa students Junias Bonou and Opelo Tshekiso were quoted in the Tribune-Review about the impact of CMU-Africa and the recently-announced partnership with the Mastercard Foundation.

A $3 million NSF grant has been jointly awarded to Carnegie Mellon University, Johns Hopkins University, and New York University to fund the development of a new career advancement model.

Carnegie Mellon University will lead an alliance to develop a new career advancement model, Project ELEVATE, through the Alliances for Graduate Education and the Professoriate (AGEP), with Johns Hopkins University and New York University also part of the team.

Christopher Martin, CMU alumnus and director of engineering, research, and development for the Bosch Research and Technology Center in Pittsburgh, is named president of the Carnegie Bosch Institute.

A lifetime of innovation and leadership in the suburbs of Pittsburgh, Pennsylvania has inspired a Carnegie Mellon alumnus to make a generous gift to support electrical and computer engineering at the institution.

With major investments in infrastructure and innovation pending, a multi-disciplinary initiative lead by EPP’s Erica Fuchs is building the tools and innovations to inform government decisions.

The 8th annual CMU-Africa graduation ceremony took place on Sunday, May 23, celebrating this year’s graduating class of 66 graduates from 12 different countries in Africa.

Rethinking the rink for hockey safety

Whether 50 pounds or 200, hockey players come in all sizes, and their safety matters. This unique collaboration invites Carnegie Mellon students to explore new ways to make hockey safer.

CMU Engineering teamed up with the Pittsburgh Penguins and Covestro in the third annual “Rethink the Rink” make-a-thon. Over spring break, teams of students created shoulder and elbow pad designs to better protect hockey players.

Carnegie Mellon University alumnus William Strecker and his wife, Nancy, have made a transformational $15 million gift to endow the dean’s chair of the College of Engineering.

William H. Sanders of the University of Illinois at Urbana-Champaign has been appointed as the next dean of the College of Engineering, effective January 1, 2020.