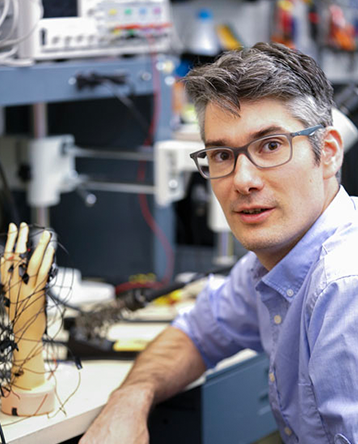 Anthony Rowe is a professor in the Department of Electrical and Computer Engineering at Carnegie Mellon University. His research interests are in networked real-time embedded systems with a focus on low-power wireless communication. His most recent projects have related to large-scale sensing for critical infrastructure monitoring and building energy-efficiency. His past work has led to dozens of hardware and software systems, four best paper awards, and several widely adopted open-source research platforms. He earned a Ph.D. in Electrical and Computer Engineering from Carnegie Mellon in 2010.

He is currently the director of the SRC/DARPA sponsored CONIX Research Center, which spans seven universities with the goal of exploring future distributed computing architectures. His past work has led to dozens of hardware and software systems, seven best paper awards, talks at venues like the World Economic Forum in Davos, and several widely adopted open-source research platforms. He received the Lutron Joel and Ruth Spira Excellence in Teaching Award in 2013, the CMU CIT Early Career Fellowship and the Steven Fenves Award for Systems Research in 2015, and the Dr. William D. and Nancy W. Strecker Early Career chair in 2016.

An overview of papers, authored by members of CMU's CyLab Security and Privacy Institute, being presented at the 31st USENIX Security Symposium

Three research papers from CyLab on privacy and data protection were highlighted in an article by Technical.ly.

CyLab’s Lumos team was highlighted in The Hacker News for recent research.

Over $400K in seed funding has been awarded to 18 different faculty and staff across seven departments at Carnegie Mellon to support security and privacy research.

Christopher Martin, CMU alumnus and director of engineering, research, and development for the Bosch Research and Technology Center in Pittsburgh, is named president of the Carnegie Bosch Institute.

Bosch and CMU focus on how virtual and physical worlds interact

A platform for physical and virtual collaboration

Researchers from the CONIX research center have made the first open-source version of their novel platform combining augmented and virtual reality into a unified collaborative space.

Carnegie Mellon CyLab’s Secure and Private IoT Initiative (IoT@CyLab) has announced its third round of funding, which will support 12 Internet of Things (IoT)-related projects for one year.

Carnegie Mellon researchers were awarded a $1M NSF grant to investigate a system that allows devices to scan wide bandwidths to avert interference.

CMU ECE alumnus Patrick Lazik and his team at Yodel Labs have developed a system that creates contact networks to contain COVID-19.