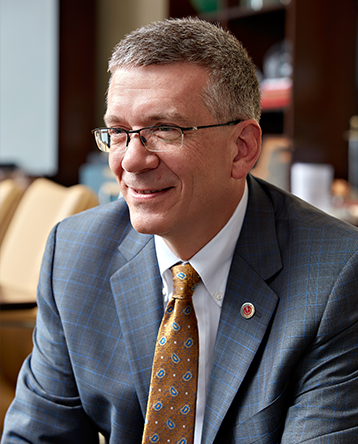 Garrett's research and teaching interests are oriented toward applications of sensors and sensor systems to civil infrastructure condition assessment; applications of data mining and machine learning techniques for infrastructure management problems in civil and environmental engineering; mobile hardware/software systems for field applications; representations and processing strategies to support the usage of engineering codes, standards, and specifications; knowledge-based decision support systems. Garrett has published his research in over 60 refereed journal articles, over 80 refereed conference papers, over 90 other conference papers and 10 sections or chapters in books or monographs.

Garrett was awarded an Alexander von Humboldt Research Prize in 2012. He has also received the 2007 Steven J. Fenves Award for Systems Research at Carnegie Mellon and the 2006 ASCE Computing in Civil Engineering Award, among other awards.

Provost and CEE Professor James H. Garrett, Jr. has been selected for membership into the National Academy of Construction.

Carnegie Mellon University has named James H. Garrett Jr. as the university’s next provost and chief academic officer after a rigorous, comprehensive, and international search

Celebrating NASA with a history of collaboration

As NASA turns 60, the College of Engineering celebrates its history of partnerships with NASA: from research and competitions, to the CMU-SV campus located at NASA’s Ames Research Park.

Carnegie Mellon University celebrates the relocation of the Carnegie Bosch Institute to the College of Engineering.

Spring was a busy and productive semester for the College of Engineering. Catch up with what students from all departments have achieved in the past months.

CMU Engineering and the College of Engineering and Architecture of Howard University are launching a new partnership that will include a dual-degree Ph.D. program and other initiatives.

Governor Tom Wolf announced the launch of the Pennsylvania Manufacturing Initiative, which will ensure that Pennsylvania remains a national and international leader in manufacturing.

James H. Garrett, Jr. has been honored by ASCE with inclusion in its 2018 class of Distinguished Members.